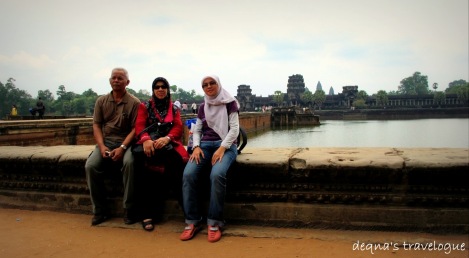 On the outskirts of Siem Reap in north-western Cambodia lies Angkor, the capital of an ancient and powerful Khmer Empire. Angkor Wat is amazing. Lost to civilisation for hundreds of years, it has now been restored to glory as one the world’s greatest historical and architectural wonders. It’s so hard to imagine that this cultural heritage was built with bare hands and has withstood the test of time. I’m not sure how these “lost cities” we’ve been visiting could ever really be lost, considering their magnitude, importance, and beauty, but Angkor Wat is yet another lost city. The Angkor Wat Archaeological Park stretches over 400 square kilometres, and contains several large, restored ruins amongst over 1,000 temples (or wats). If you really into historical and want to visit all the temples, you may need 2 or 3days to cover all the temples. And if you only have 1 day to visit the Angkor Wat, I would recommend visiting the famous one as I did… Angkor aside, popular wats include Angkor Thom, Bayon, and Ta Prohm — the Tomb Raider temple. The ride to Angkor by tuk-tuk takes about 40 minutes from most city center hotels.

Angkor Wat itself is certainly impressive. Angkor Wat is surrounded on a sides by an approximately 60m wide moat that was filled with water, and an equally long causeway leads to the west facing main entrance, the entrance gate into the Angkor Wat complex.  It’s a vast stone complex of inter-connected courtyards, towers and hallways. The Angkor Wat temple consists of three rectangular galleries rising to a central tower, with each level higher than the one before. Once we reached the temple, we were confronted with bas-reliefs that covered the exterior wall of the first level. The level of detail is amazing. Every available surface has been decorated. Plenty of movies and computer games have drawn on Angkor Wat as inspiration. Most of the decorations of the Angkor Wat takes the form of the reliefs that are sculpted so excellently. In each gallery, the reliefs sculpted are depicting various episodes of mythological stories and historic events. 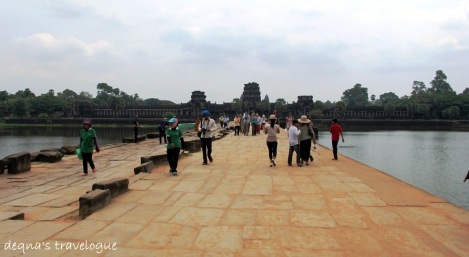 The central complex  with its five peaked towers represents Mount Meru, the home of the gods and the center of the universe. I got a sense of the real height as I slowly ascended the five tiers of the temple. Each tier becomes taller and the stairways steeper and treads narrower. The topmost tier provides a nice vantage to view the surrounding jungles and also the outer perimeter structures of Angkor Wat.We wandered through Angkor War and eventually reached the other end of the complex. It is surrounded by grass so we decided to walk back around the outside wall rather than finding our way back through the interior. The Angkor Wat is definitely one very admirable and statuesque temple despite the fact that there were many renovations and scaffolding around during our visit.

For those into photography, capturing the view of  large orange sun rising behind Angkor Wat is a sight not to be missed. However, this is well known and a huge number of tourists will be fighting over that iconic picture of Angkor Wat reflecting in the pond in front of the temple. About hour after the sunrise however most of these people have left and it gives you an opportunity to explore the temple in some peace.

Angkor Thom and the Bayon

Angkor Thom, the original old city is the great walled city that is home to Bayon, the other jewel in the Angkor temples crown.  It’s mostly covered in jungle now, but back in its heyday more than a million people lived here. The entrance, one of five is the easily recognizable arch with large faces topping it. The faces represent Buddha but are said to have been constructed to resemble King Jayavarman who built the city. All of these are along a modern road. The original gates of Angkor Thom are still standing, and at their very narrow width they can cause quite the traffic jam. Angkor Thom.

Bayon, a Buddhist temple built in the late 12th century is in the middle of Angkor Thom. Bayon’s most famous feature is the hundreds of faces carved into the stone, staring placidly towards the four cardinal directions. On every corner of every tower of the building is this whimsical, all-knowing smile following you wherever you go, still smiling out from the weathered stone after hundreds of years. Its 54 towers are carved into 216 faces they believe to be of Avalokiteshvara, or the Bodhisattva of compassion, although they apparently bare an uncanny likeness to the modest King Jayavarman himself. 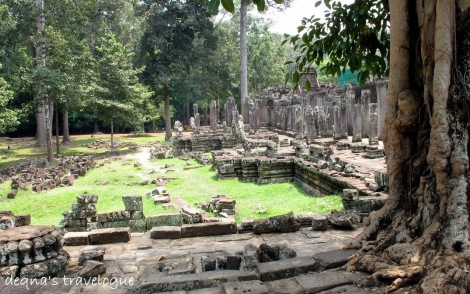 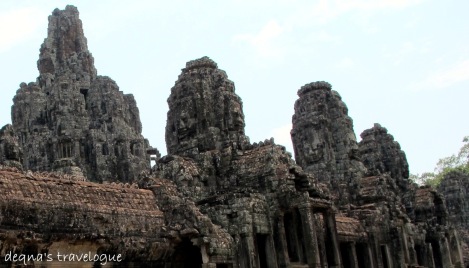 Ta Prohm, made famous by Angelina Jolie’s hit movie Tomb Raider, is a must see. For me it was the best of the 3 popular sites (Angkor, Ta Prohm & Bayon). And not for the tomb raider thing, but it is a mini city that has been taken over by nature. The magnitude of the trees growing through is awesome. Ta Prom is over 1000 years old and is the burial ground for a king’s wife. The chamber that held the tomb has a bunch of holes that were once filled with gold and diamonds, but those were stolen during the 16th century when the Thai invaded. 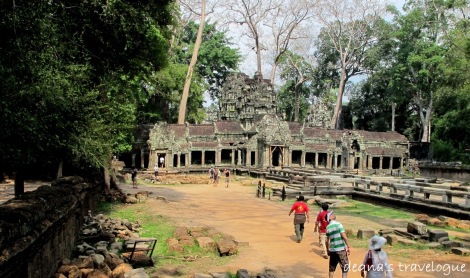 Many of the fig and cotton trees, which have taken over and consumed the temple, still hold it in their clutches. It really demonstrates the destructive power of the jungle. Ta Prohm is tragically beautiful in its ruinous state. It’s the best site to get those classic “tree melting into the rock” photographs that are so strongly associated with Angkor Wat (although Angkor Thom is actually a separate temple from nearby Angkor Wat). The downside of this temple’s popularity is it’s possibly even busier than Angkor Wat. Due to the large numbers of hot weary people jammed into a small space tempers began to fray. Particularly at some of the spots, you need to take turns to take photographs. 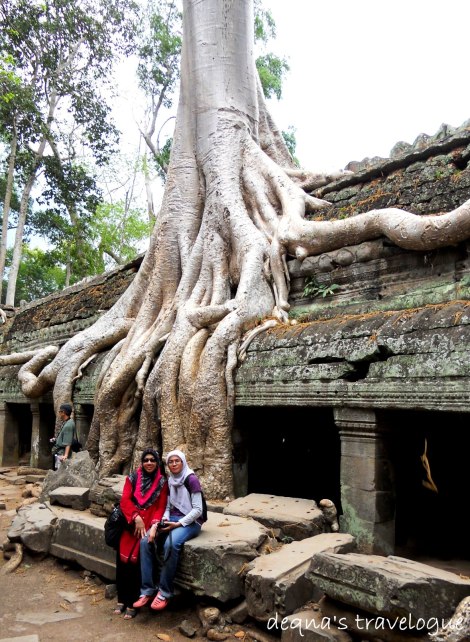 Without doubt, the temples of Angkor Wat in Cambodia are among the most beautiful and evocative touristic sights in the world. Angkor is in every sense an incredible place with an incredible story. None the less every one of the temple within the Angkor Archaelogical Park are unique on it’s own. All of the temples are in a visible state of ruin and restoration work is underway, being carried out as joint projects with Archeological departments of various foreign governments.