For those who arrived at the Tianjin Airport and want to proceed to Beijing, I would highly recommend to take the bullet train. We took the rides during my trip to Beijing in 2010 with my parents and it was quite fun. Absolutely superb, whispering quiet and the journey from Beijing to Tianjin approx 160 Km took a mere 35 minutes.

The train departs every 30mins from Tianjin Train Station to Beijing South Railway Station with the standard ticket price (2nd class) was rmb58 per way. The first class ticket would cost you rmb68, but from my opinion, you don’t need to waste the money as the 2nd class seating was perfectly comfortable. The cabin was very clean and even the toilets were clean. There are sale of drinks and food on board.

This high speed bullet train is indeed the fastest train in China @ maybe in the world ? It’s been said that the top speed was 350km/h. The whole journey was very smooth, you can’t really feel anything when the bullet train moves, even at 330km/hr !!!.. No shaking and trembling. The best part was when another bullet train came from the other direction, voooooooooffff and gone! That happened twice, so another voooooooooffff and gone! CRAZY FAST AND INCREDIBLE!

daddy can even sleep soundly during the ride..

The first bullet train departs Tianjin at 6.25am and the last one at 10.45pm. For return, the last train from Beijing South station to Tianjin Train Station leaves at 11pm

How to take the bullet train from Tianjin Airport

You can take the shuttle bus from tianjin airport to Tianjin train station. The bus stand is just in front of the airport arrival hall. The fare is RMB10. The bus will stop about 100m before the train station south entrance. Just walk along the pavement and you will see the train station. You can’t miss the station – it’s HUGE – and you can see the railway tracks from the road.The ticket counter is on your left once you enter the train station. Just beware that there is not many english signage inside the station, but you can ask people for direction. Ohya.. i noticed that most of the locals can’t speak english, even the worker. Try to find people who looks like professionals or university students and most probably they can help you if you are lost.

At the railway station, the automatic ticket machines are in English, but require a Chinese ID card to finalize the transaction. So, unless you are a resident, this option cannot be used. Only other opion: the ticket offices. Do not be intimidated by the often long lines and only Chinese signs (strange, because rest of station all signs also in English). Just get in line, because my experience was that both attendents spoke English sufficiently to get what I wanted.

queuing with the locals to buy the train ticket… no problem…

The waiting hall is at Level 1. Announcement is in both chinese and english, however, don’t worry,  the ticket will have the train no, departure gate no, coach no and seat no. Bullet train start with ‘C’ and is about 15 minutes between train (peak) and 30 minutes during off peak.

The trip to Beijing south station take about 30 minutes. On arrival just follow the signage to the taxi stand. Do not use taxi touts. there are hundred of official taxi waiting in line for passenger. Likewise arriving at Beijing South Station is a breeze – there are plenty signs in English and it really isn’t as scary as you may expect. 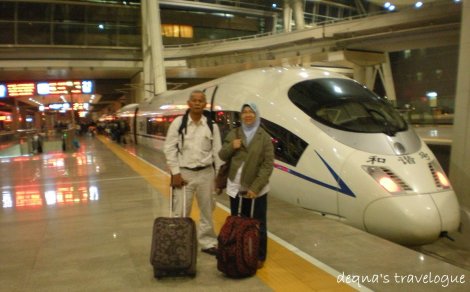 in front of the bullet train at the Beijing South Station

At the Beijing South Station, it was a very long queue at the waiting area after we bought our train ticket. As we walked up to the waiting area and started to walk into the queue, we were called up by one of the officer, “Yes, this way please.” She directed us to wait next to her. She then walked us to the front and opened the VIP gate, for us to pass in. WOW! Believe me, EVERYONE who was queuing, looking at us, and I bet, cursing like hell! Hahahaha!