It has been more than a month, I unable to update anything in this travelogue.. Yeah.. of course, the same reason.. busy with works.. hehehe.. However, it won’t obstruct me to do what I love most.. to travel..  I actually just came back last week from another trip to Japan.. Hehehe..  my second trip for this year to Japan, since just earlier this year I went to Tokyo and Sapporo with my girl friends, Ili and Rushd. Japan was soo exciting that I can’t resist myself to go again when I manage to get a good deal by MAS airline. Who can’t resist the temptation of RM799 return ticket KL-Osaka using MAS.. No worries on luggage and food anymore.. Hahaha.. This time, I traveled with my elder sister Dura, being a Japan fanatic fan and my big brother, Ayie. 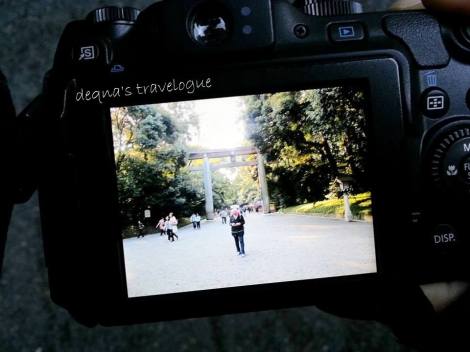 Replying to client’s email while in Meiji.. haaiisshh..

Since we were flying to Osaka and we also want to go to Tokyo, I’ve bought a Japan Railpass before we landed there. It was a wise decision, as we can go anywhere in Japan using JR train for 7days with this pass. We stayed few days in Osaka and Tokyo, and also a daytrip to neighboring city of Kyoto and Kobe. It was more of a leisure trip, as my sister can’t walk that much. We really enjoyed ourselves although the weather was not soo good, as it raining almost everyday.

The first few days in Osaka, we stayed at Hotel Consort, Shin-Osaka area. The hotel located  just beside the NISHINAKAJIMAMINAMIGATA station along  the Subway Midosuji Line that give give us a lot of flexibility to move around the city. The first day, we went to the Osaka Bay area since my sister want to visit the Osaka Aquarium Kaiyukan. Visiting this aquarium for the second time, I still feel excited as I managed to see the big whale shark and the mola-mola, which I didn’t get to see during my previous diving trips. On the second in Osaka, our initial plan is to spend a day at Universal Studio Japan, but  we didn’t notice that that day was actually a public holiday in Japan.  As we arrived at the Universal city station, we were surprised to see the whole place was full with local people dressing in Halloween theme. Not wanting the waste our time and money, we decided to change our plan and went back to the Universal Studio Japan on our last day in Osaka. 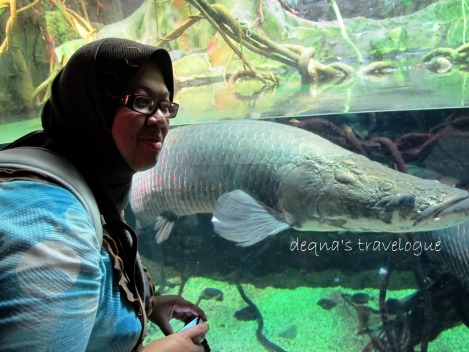 We also visited the Tennoji area, Osaka Castle area and the spent the whole evening exploring the massive and confusing Namba Station area. Since we stayed nearby the train station, especially during the last few days in Osaka where we stayed just 2minutes walk from the Shinsaibashi Street, we spent most of the night walking and shopping along the Ebisu-suji covered shopping street, the  Shinsaibashi-suji shopping street and also the Dotonbori until most of the shop closed. Without our notice, we had actually walk almost 2km along the shopping street every night before the return to the hotel. Hehehe…

My Bro.. thinking whether he should buy the ‘ultraman’ toys for his kids at home.. 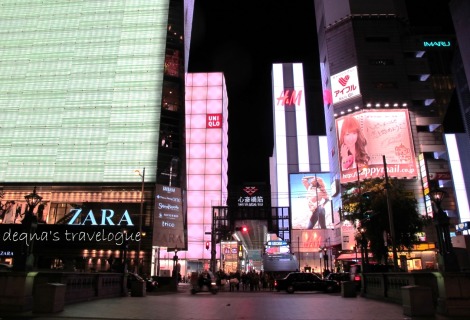 We activated our Japan Railpass on day 3, where we utilized it for a day trip to Kyoto. A morning walk through thousands of red Torii gate at the beautiful Fushimi Inari Shrine was a blast. Never imagined such a dense collection of torii gates could exist without any damage to the landscape, but there it is, absolutely amazing attraction. The pathways up the hill are just incredible. We did not go right to the top as we needed to head off to the next sight. Even with the few trail, we spent almost two hours in the area. The shrine located just outside the Inari JR station, just 2 train stop from the Kyoto Station by using the Nara lines. However, in Kyoto itself, most of the attraction was not covered by the JR pass, so, we had to buy a 600y 1day bus pass. Its already noon when we reached the Kiyomizudera Temple. Not only was the temple beautiful to visit, the surrounding areas, including the gardens around it and the hill of local shops with crafts etc were great to visit. We spent the whole evening walking around the Higashiyama through the streets of Sannenzaka and Ninenzaka, and leisurely walk through Yasaka Shrine and Gion area. Its already dark when we reached the Shijo Karawamachi area. We spent the rest of the night in Kyoto at the  Teramachi and Shin Kyogoku Shopping Arcades, two parallel covered pedestrian streets, which are packed with shops and restaurants before taking the shinkansen back to Osaka. 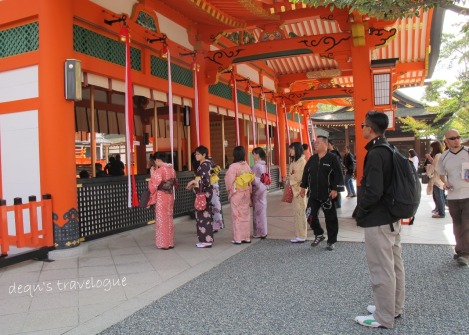 at the Kiyomizudera Temple area

Viewing Kyoto from the top of Kiyomizudera

Reminded me of the “Memoirs of Geisha”

For our transfer to Tokyo on the fourth day, we had made reservation on the previous day to take the shinkansen from Shin-Osaka to Tokyo at noon. Since we had some time in the morning, my brother and I decided to make a quick tour to Kobe, while my sister want to have more rest at the hotel. Using the JR pass, we took the express train and reached Kobe within 20mins. We stop at the Sannomiya Station, and walked at the Kobe Port, Meriken Park, the Chinatown, before heading back to Osaka 2hours later. By 1.50pm, we already on the shinkansen heading towards Tokyo. Taking the shinkansen from Osaka to Tokyo, and vice versa was amazing. Although we took the second fast bullet train, the Hikari, (JRPass can only take Hikari).. it only took 3hrs train ride. The seats was quite wide and comfy enough even for plus size people like my sister. We had choosen seat facing the Mount Fuji during our train rides (seat D+E), however, in both ways the weather failed us. We can only see a glimpse of Mount Fuji cones in between dark clouds during our rides from Osaka to Tokyo. And Mount Fuji totally dissappeared when we return back from Tokyo to Osaka. Huhuhu.. Maybe next trip ya…

We stayed 4 night in Tokyo. We stayed in a nice studio apartment nearby Shibuya MarkCity, just 10 minutes walk from the famous Shibuya crossing, rented directly from a local Japanese than I found through the airbnb.com. Very nice guy, named Hiro. Although I didn’t managed to meet him during our stay, he always make an effort to contact us through emails almost every day… and even check on our condition right after a earthquake, to make sure we were ok. Yeah… a 5.5 earthquake.. It was my first time experiencing such an earthquake. It happened during our third day in Tokyo, early morning about 6am that woke us from sleep. The whole room was shaking for few minutes but luckily nothing serious happened. The earthquake had caused some interuption on the some rail network especially the long distance route, but fortunately no other casualty was reported. 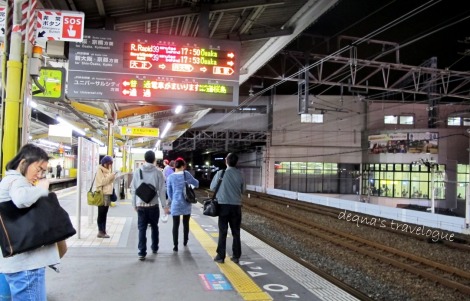 some of the train delays due to earthquake

The bad weather continued during our stay in Tokyo. Raining almost everyday, and the temperature dropped to single digit during our second day in Tokyo. We could watch every nigh, the local news showing the weird weather change throughout Japan especially the Northen part of Japan. In Hokaido, it even storm snow !!… Goshhh… it was supposed to be autumn season..!!.. With jacket, rain coat and umbrella, we walked in the rain exploring different part of the city. 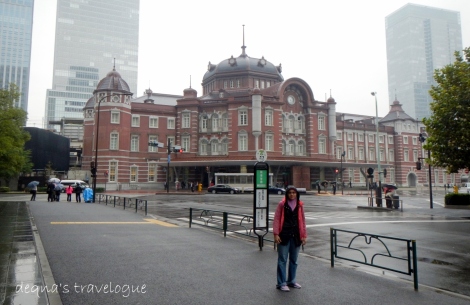 Spending a day walking around Harajuku and Shibuya was one of my favourite in Tokyo. We walked from the serene Meiji Shrine, to the teen subculture at the Harajuku Takeshita-Dori Street, continued at the wonderful architectural display and high fashion street of Omotesando, to the hipster and trendy boutique along the cat street and ended by the colourfull energy of Shibuya. The Meiji temple is a favourite spot of mine. It was amazing to see a very old shrine in the heart of Shibuya, so quiet and sirene that you forget you’re in such a bustling city. While walking there, we saw many children aged between 3-7 yrs in traditional kimono (boys and girls). Apparently, it was 7,5, 3 Children’s Day.. They were so adorable accompanied by very proud parents and grandparents. 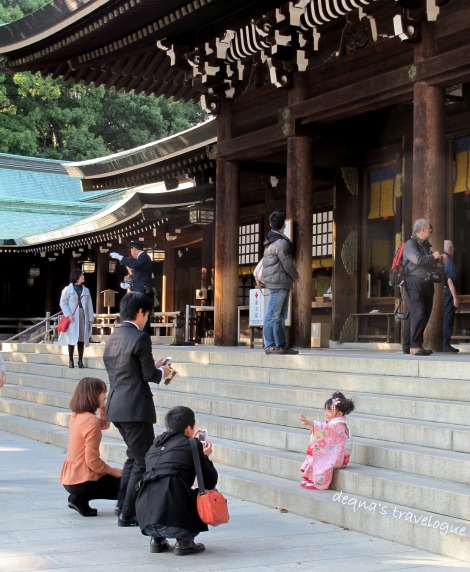 One of the great things about Tokyo is that each district feels like a totally different city. In one day, we spend a morning at relatively old, working class, cozy, cheap neighborhood of Ueno and mingle with the locals the alleys of Ameyoko street.. an afternoon walk at the traditional Japanese district of Asakusa while shopping for souvenir at the Namikase street,…. and spend the rest of the day exploring the vibrant and colourful electric and anime city of Akihabara. We also walk around the forest of highrises at the skycraper district of Shinjuku, and went to the observation tower of Tokyo Metropolitan Building to see the whole  Tokyo from top. Walking around the Imperial Palace garden area was a pleasant getaway from the grayness of Tokyo’s modern architecture. We also manage to spend some time at the Ikebukuro, Ropongi and the Odaiba area.

One of the best kebab I’ve tried so far.. at the Ameyoko Street

shopping for souvenir at Asakusa

I’m a bit dissapointed that we unable to find any big crab at the Tsukiji market as it is not crab season. During my previous trip to this market earlier this year, I could see many king crab been sold at the market. I’ve been told by someone that the crab can only be found during winter season. Aaarrgghhh.. I really want to eat crab !!… To add to my dissappointment, the Sushizenmai, the sushi shop that I’ve been before was closed for renovation, so we just had a sushi breakfast at one of the sushi restaurant at the outer market.. Another reason for me come back to Japan… hehehehe..

Since this time I traveled with my not-so-active sister, our journey concentrated more in the city center. Therefore, the JR Railpass that we had maybe not fully utilized. Yeah… I really want to visit the outer city, see the villages and smaller part of Japan, where most of beautiful nature lies.. The Unesco Heritage, Shirakawa-go Village and Takayama was on the top of my list.. Till the next trip ya..

10 responses to “Another Japan Trip : Osaka-Tokyo-Osaka with JR Pass”