My first visit to Seoul was in early July 2011, together with both my parents and my elder sister. My initial planning was to celebrate my elder sister birthday there, as a birthday gift as she really love to watch korean drama. I manage to buy the flight ticket one year earlier during the Airasia promotion for only RM350 return per person. ;).

After breakfast, we take the subway to Gyeongbokgung Palace. From Myeongdong Station, we transfer at Chungmuro to line 3 and stop at Gyeongbokgung Station. Gyeongbokgung is just outside the subway at exit 5. We spend 3 hours exploring the palace including visiting the National Folk Museum located within the palace complex. At 1pm, we exit the palace and walk towards Insadong which just 15minutes walk. After window shopping, its already 3pm, and we still have not bump into any muslim food here. So, we take the subway nearby (Angguk station line 3) to Itaewon (Itaewon station line 6) as we knew from the internet that there is a mosque there with few muslim restaurant nearby. We walked towards the mosque and found few muslim restaurant. We decided to ate at an indian muslim restaurant and pray at the mosque before exploring the streets of Itaewon. Its already 8pm when we went back to the guesthouse for rest. At 9.30pm, we went out to the Myeongdong shopping street. The streets started to closed at 10.30pm and we went back for rest and sleep the next day adventure. 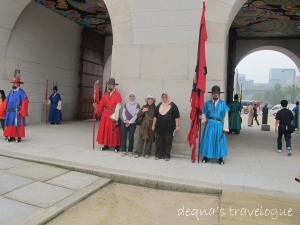 photos with the palace guards 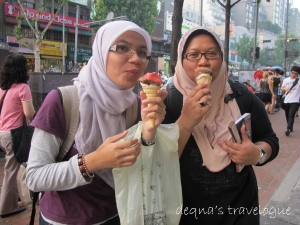 It’s raining heavily since early morning and our initial planning to celebrate my sister birthday at Nami Island was cancelled. When the rains slow down at 11.30am, and we quickly out went to Myeongdong street  because my sister is searching for shoes as her shoes was torn out. Because it is still raining, we decided to go to Lotte World because it is totally indoor. We take the subway towards Jamsil station (line 2), exit 4 direct into the Lotte World Mall. We hang around the mall, ice skating ring, snap pictures until we feel tired. We could not find any muslim food here, so we decided to go back and celebrate my sister birthday at the guesthouse. Its still raining when we reached the guesthouse. We cooked dinner at the guesthouse kitchen and my sister cut the birthday cake that we buy the day before at a Turkish bakery in Itaewon. At 9pm, we went back to Myeongdong street to buy the shoes that my sister had eyeing for in the moring. Mama had agreed to buy her the sport shoes as her birthday present. We also shop some beauty care which is very famous and quite cheap here, such as Faceshop, Nature Republic and few more. 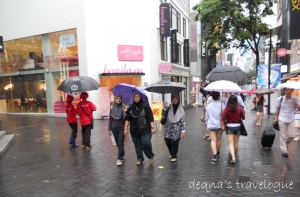 hanging out at Lotte World

eating snacks at the fountain inside Lotte World

shopping at Myeongdong at night

Early morning, we started our journey to Nami Island. We decided to travel ourselves by subway and train as its more cheaper than taking the shuttle bus. It was confusing but fun journey, with few subway transfer, 1 hr train ride out of Seoul exiting at Gapyeong station, taxi ride from station to feri terminal and 15minutes ferry ride to Nami Island. Its already 1pm when we step our foot at Nami Island. I was relief that the weather was okey throughout the whole day. We explore the whole island, snap pictures while admiring the beautiful scenery of this island. We were dissappointed when we found out that the only Muslim Cafe at this place was closed, and we did not bring enough food as we thought that we want to have meal at this cafe. We ate all the food we bring until the last bite. We started our journey back at 4pm and decided to stop at Itaewon for a proper meal and pray. We had another dissappointment because there is no muslim korean food restaurant available and ended eating indian meal at the Taj Mahal Restaurant. Before leaving Itaewon, we stop to buy nice kebab and Turkish ice-cream at Mr Kebab. We stop at Jongno(3)sam-ga to visit Cheonggyecheon Stream. The lighting effect and scenery of the stream during the night time was superb.  It’s already 11pm when we reached the guesthouse and rest.

walking from guesthouse to Myeongdong Subway 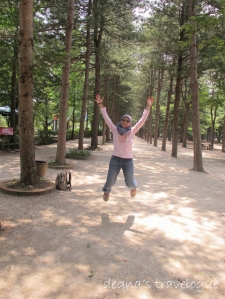 at the Nami Island 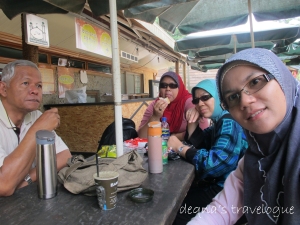 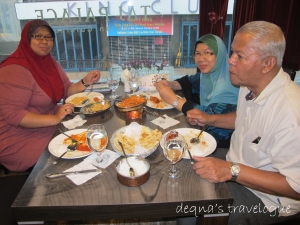 meal at the Taj Mahal Restaurant 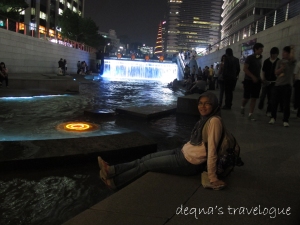 In the morning, we went to Nandaemun Market to buy souveniours to bring back home. It is just 1 subway stop from Myeongdong. The shops are just started to open when we reached there at 10pm. Goods sold here were much more cheaper than shops at other places that we went to. We spent almost 4 hours there and went back to the guesthouse with shopping bags full in hand. After lunch and rest, we decided to visit Namsan Tower which is nearby our guesthouse. It is only 15 minutes walk uphill to the Cable Car area to Namsan Tower. We ride the cable car towards the foot of the tower. We explore the foothill of the tower before taking the lift to observation deck on the top of the tower. We can see the whole city view from inside observation deck and the view was fantastic. We also visit the teddy bear museum located below the tower. It started to dark when we went down, and the sunset view from inside the cable car was really beautiful. After dinner, we decided to have a last shopping spree at the Myeongdong area as today is our last day in seoul. 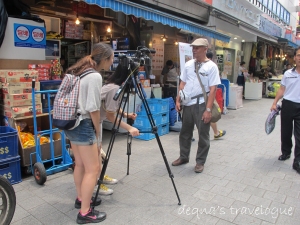 daddy got interviewed while shopping at Nandaemun Market

at the bottom of Seoul Tower

view of Seoul City from the Seoul Tower observation deck

Day 6 and back to Malaysia

Our flight will be late at 11pm, however we need to check out by 12noon. We spent the whole morning packing and cooked food for the remaining day. We were lucky that the guesthouse allowed us to store our bags at the reception office and allow us to utilize the guesthouse facilities until our van shuttle to the airport at 7pm. After check-out, we went out for last city visit. We take the subway to Gwanghamun Square, and i was surprise to know that the square was actually just in front of Gyeongbokgung Palace and also just nearby Cheonggyecheon Stream. I was a bit dissappointed for not doing proper planning as i wasting our time because we could visit these 3 places on the first day. After some photo session and lazying by the stream its already 3pm. Mama and I decided to go back to Nandaemun Market for last minutes shopping but Daddy and my sister decided to go back to the guesthouse. At 7pm, our driver had arrived to sent us to the airport. We decided to book the guesthouse airport transfer because we had a lot of bags from shopping and it will be difficult to navigate through subway with these heavy bags. At 8pm, we already reached the airport. After check-in, we pray at the airport and wait and the departure hall until we boarded at 11pm.

Gwanghamun Square with Gyeongbokgung Palace behind it

rest at the Cheongyecheon stream