Day by day, I feel that the traffic in Kuala Lumpur is getting worst..  Every day, getting to my office or returning home took longer time.. 1.5 hours drive for 10km journey from my house to my office sounds crazy.. and even reached 2hours in rainy days. Ohh.. I wish I could just use public transportation to work.. Aarrgghh..!!! There’s no LRT station nearby my house..

That’s Kuala Lumpur… Being the federal capital of Malaysia, we only have few lines of rail network that only covers few parts of the city, namely RapidKL Light Rail Transit, KL Monorail and KTM Komuter. This fact make most of the population in Kuala Lumpur depending on cars to go to work, like me.. Cars had become the basic necessity for the people living in Kuala Lumpur. Every house must have at least a car, some even more.. In my house, we had 3 cars, mine, my dad and my little brother. And elder sister and big brother who livein different city got a car each. Just imagine when all our family gather.. Our house will full with cars.. hehehe…    The increasing number of population on Kuala Lumpur that resulted increasing numbers of cars on the roads. Traffic jammed is everywhere, especially on the peak hours. Even using highways now days  will be trapped in the traffic jam..

I wish Kuala Lumpur can have better rail network like other developed city. Having traveled to Japan, South Korea, Hong Kong, China and Singapore, I am really amazed with how efficient their public transportation is. Wide coverage and efficient.. we can travel everywhere easily. People do not need to rely on cars to go from one place to the other..

Comparison of rail network in few city that I’ve experience… 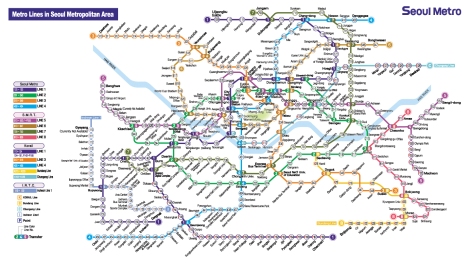 Oh ya… my recent trip to Tokyo even surprised me.. the rail network connectivity was very massive and well connected. I’m surprised to see how Japan and Korea, one of the major car manufacture in the world, do not even have much cars on their roads… and yet, they’ve become one of most influence country in Asia…

A City Planned for Cars

Being involved in few developement project in Kuala Lumpur and Johor Bahru, roads and parkings plays major role in every development. In every development submission to the authority, the roads and parking requirement is the first thing need to be complied in order to proceed further with the project. Wide roads, certain percentage required for parkings.. I become more sure that city in Kuala Lumpur in actually built for cars.. not people.. The related authority solution for traffic jam ??? Road widening and more highways… Few more years, I can foresee that Kuala Lumpur will surrounded with roads.. more roads, lesser space for pedestrian walkway.. less space for people…

3 responses to “Traffic in Kuala Lumpur”