It was long after I bought my return flight ticket to Tokyo, only I noticed that my trip falls quite near to the Sapporo Snow Festival. It had never been my  initial plan to visit Sapporo. However, when I know that Sapporo Snow Festival going to be held just few days away from my trip to Japan, I feel soo excited and decided to put Sapporo into my travel plan. I knew that I won’t be able to see the actual festival, but at least, I can see how the ice sculpture and snow sculpture, or even see the preparation for the Sapporo festival been made. And luckily I’ve made a right decision…

I’ve always read about this famous snow festival.. Every year millions of people from all over the world came Sapporo to take part in this Japan’s largest snow festival, to see a large number of splendid snow statues and ice sculptures, and events like live music, traditional winter foods, and a big air snowboard competition. Preparation the event was done as long as one month, and for seven days in February, these statues and sculptures (both large and small) had turned Sapporo into a winter dreamland of crystal-like ice and white snow. The 64th Sapporo Snow Festival 2013 was officially held on 5th to 11th February 2013, and I was there just 5 days before the event started.

The Snow Festival takes place at three venues across Sapporo, but the main stage is the 12-block long Odori. It’s here on each of it’s 12 blocks that we can find the largest and most internationally renowned ice sculptures been made. We visited the Odari Park few times to see the making of these sculpture. Some of the sculpture almost completed and some of it still need more time to finish. It was amazing to see how they make these sculpture, when I can’t even built a decent snowman. Other than that, they even have an ice rink and ski area. 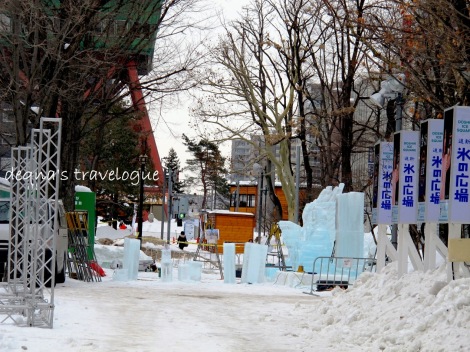 The Sapporo Snow Festival is a great way to enjoy a day in the snow…. more reason for me to come back to Sapporo, next time will be visiting the actual event..